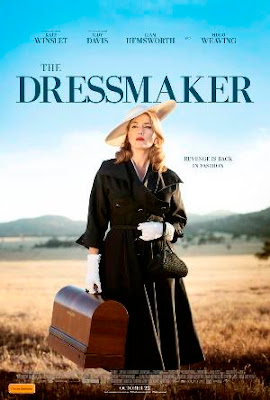 Based on the book “The Dressmaker” by Rosalie Ham

A young woman comes back home after twenty years, to exact revenge on her townsfolk, and confront the ghosts of her past

Tilly Dunnage and her mother, Molly have been outcasts in Dungatar, Australia for as long as they could remember. Due to an incident that happened when Tilly was a child, she was sent away. Twenty years later, she comes back, a seasoned dressmaker, having learned couture from the finest Parisian designers. She brings a refreshing style to the outfits of the town women, but she soon realises, that she would never win their affections. She opts for revenge instead.

Kate Winslet brings the character of Tilly Dunnage to life, portraying her so different from how she was described in the book. However the frequency with which Tilly was seen smoking, was exaggerated. Within the first forty five minutes of the film, she was seen smoking at least four times. Perhaps, the director was trying to pass a feminist message, forgetting that a woman with a cigar has already become a feminist cliché. Sue maslin could have done a better job at casting, as Winslet seems a little too old for the role. The producer should have also considered how Winslet and Hemsworth would look as a couple, which had me cringing several times during the film. Hemsworth did not pull a convincing Ted Mcswinney. Perhaps, he did try, but he wasn't right for the role. Hugo Weaving played Sergeant Farrat well, making him look quite suited for the part
The director did a good job of bringing more excitement to the story by creatively altering parts of the original book, for example the opening scene, where Tilly first arrives in Dungatar was directed with skill, considering what Moorhouse had to work with, indeed, it infused more drama and suspense into the film. In parts that were not cut out, the film did an almost excellent job of sticking to dialogue the way it was in the book. The soundtracks and sound effects used in the movie were of good quality, suited and engaging. The mise-en- scene, while appropriately created in terms of geographical outlook (shrubbery et al), at different points gave the impression that there were only five to ten houses in Dungatar. The cinematography was done with some skill and creativity(camera angles)

The themes of feminism and class are predominant throughout the movie. Tilly Dunnage is portrayed as an independent, successful and freethinking spinster, who seems to have a lot of power over the ladies (and some men) of Dungatar. Despite financial handicaps, the women of Dungatar are eager to wear the latest European styles, in order to give themselves a sense of pride and self-esteem, at the detriment of their pockets, and accruing large debts.

Jocelyn Moorhouse is fond of strong heroines. She had a lot of success with Proof in 1991, but reception of her latter works has been more negative than positive, until The Dressmaker. The Dressmaker is a step in the right direction for Moorhouse, and we’ll be expecting more from her in the future