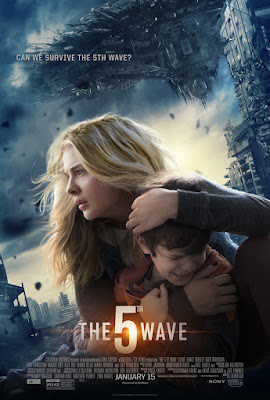 An alien ship arrives on earth, settling over Ohio, US. All is calm at first until they hit the humans with “waves” of destruction, drastically reducing the earth’s population. Their real agenda to appropriate the earth from the humans is eventually revealed, as they release the final and fifth “wave”-taking out the rest of the human race. Cassie Sullivan, on the lookout for her own life, tries to reunite with her little brother, Sam. She is assisted by Ben, her high school crush, and Evan Walker, a half human- half alien, who saves her life on the way.

Moretz’ performance was okay, but her co-actors were mostly mediocre. The directing was just average, which is only forgiveable because this is J. Blakeson’s second time directing an actual movie, after The Disappearance of Alice Creed in 2009(which by the way, had really good ratings). Half of the plot was narrated- the narration was simply excessive. The rest was just trekking through the woods. Sam had to be like 7 years old. Why did his father keep carrying him like an infant when the child could walk, even run when he needed to?

The plot/screenplay was downright disappointing and confusing. It was so riddled with holes and clichés. If the book plot was not working, it would have been better to rewrite it, instead of churning out this excuse of a movie plot in an attempt to stick with the book plot. One would have expected more from an Oscar-nominated screenwriter like Susannah Grant, who also wrote the screenplay for Disney’s widely successful film Pocahontas.. Akiva Goldsman, who has decades of screenwriting experience, is one of my favourite film writers, having movies like Batman and Robin, I, Robot, Hancock, and Angels and Demons under his belt. But three screenplay writers wrote The 5th Wave, and perhaps it was a “Too many cooks spoil the broth” situation.

The special effects and photography were good at least, one of the few things I appreciated about to movie, though they were not outstanding or impressive. Another thing I enjoyed was the soundtrack. Having Sia Furler perform one of the songs was a good move for the movie.

This movie explores themes like dystopia, war and coming of age. The events that took place forced upon the children and teenagers a kind of maturity, in order to be able to handle the responsibilities that the adults are not there to. One idea that The 5th Wave passes is that children are critical to the future of the human race. This is not far from the truth.

In conclusion, the next time Blakeson directs a movie, it better be a great improvement, or he’ll be building a bad reputation for himself as a bad Director. I would also advice Susannah Grant not to attempt any Sci-Fi book to movie adaptations anytime soon. The 5th Wave gave us less than we expected.