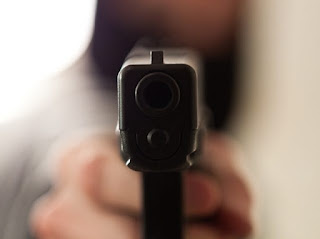 It was undeniable that travelling was in Shile’s blood. His mother always said that even as an infant, he could scarcely always be found where he was placed, often wandering off  on hands and feet to the nearest exit. When he was barely twelve, he ran away from Ibadan to his uncle’s house in Lagos, his savings just enough for the fare. Shile had dreams of visiting every continent in the world before he was thirty. However it seemed the dream was about to be cut off, as he stared into the barrel of an armed robbers’ handgun.


“You be deaf and dumb? I say bring out your money!”


Typically Shile didn’t travel with cash. Even his luggage was light. He was travelling from Port Harcourt to Abuja for a wedding.


“You say wetin? You think say we be mumu”, the masked robber pressed the gun to Shile’s temple. He felt the cold metal on his sweaty skin. The Journey had been going smoothly since they left Port Harcourt. He had decided to travel by night because the journey would be quicker and more quiet. It gave him time to relax and think.


Nearing the outskirts of Abuja, their driver had stopped at what looked like an army checkpoint. By the time they discovered that the men waving torches at them were not army officers after all, it was too late. The men were four in all, in black masks and clothes. All the passengers had been forced to get off the bus and kneel in the dirt. Two of the robbers were busy searching the bags in the bus. A young girl was crying in her mother’s arms, trembling with fear. The only elder in the bus, an aged man with snowy hair had brought out his small bible from the large pocket of his buba, clutching it and muttering prayers, his boy helper by his side, stiff with shock.


Whack! The force of the slap propelled Shile backwards.


“E be like say you wan die here today!”


A shot rang out. Someone had been shot. It was the middle-aged businessman who had been making calls throughout the journey. He had tried to escape. The last passenger, a young lady, screamed. The other two robbers came out of the bus with their loot. Shile spied his mother’s ring on one’s finger.


“Wetin be this now? Abeg make we they go o!”, the other one said to his mates. The one who had held the gun to Shile said,


“Oya everybody enter the bus now!”


The passengers scrambled inside, the old man with difficulty. The young girl was staring at the   dead man on the ground.


“Mummy what about him?”


“Ssshh!”, she covered her daughter’s mouth.


Shile felt guilty that they would be leaving the poor man on the ground. But he kept mute, as the driver accelerated and the robbers scrambled off into the bush.


When they got to Abuja, as he left the park, he dialled a phone number on his Nokia phone. A man answered


“Why you con slap me?”. The man on the phone laughed.


“You be JJC? You no want make them believe”


“Forget that one”, he answered
Shile never did.
mmake them be dey find person wey go help us sell am"rney. He had tried to escape. The last passenger, a youn