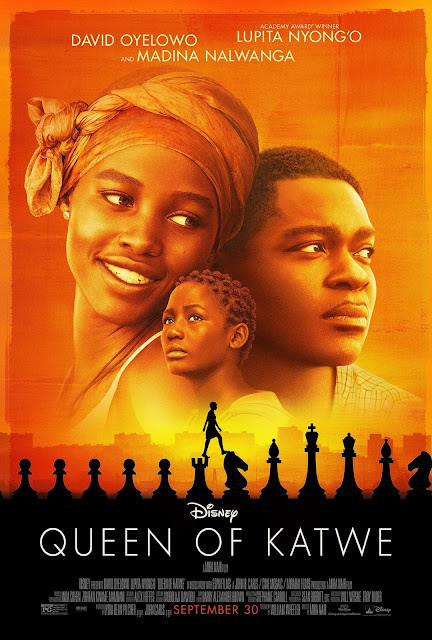 Based on the ESPN article and book by Tim Crothers

Phiona Mutesi, a young girl from the slums of Katwe, Uganda, discovers chess, and with the help of her coach, Robert Katende, becomes a prodigy, overcoming numerous obstacles.

Phiona Mutesi(Nalwanga) lives with her mother(Nyong’o) and siblings in a hovel in katwe. Life is tough and they barely scrape by. One day, she discovers a group of children playing chess, tutored by Robert Katende(Oyelowo). This discovery leads Phiona into a realm of greater possibilities, as she masters the game, despite not being able to read. Katende sees the potential in her, and takes her under his wing, training her for greater aspirations, like representing the whole country internationally.

This was the first movie I ever went to the cinema TWICE to see, and it was well worth it. Despite all the efforts of the filmmakers to market it, it seems the movie has not been getting the attention it deserves. It’s seems that people think its ALL about chess, but they are wrong (though I was motivated to resume playing the game). The cinematography and editing were done professionally, certain shots of the environment taken for effect- like a group of birds treading lightly on the mud near the dump, a fisherman casting his net skilfully in the peaceful river. The shot of the interior King’s College from the ceiling was very impressive, providing us with so much information in just one shot. The mise-en-scene, the background objects, the arrangement of actors within a frame in order to portray an idea or a concept was done with skill.

The actors’ performances exceed expectations, especially award-winning Nyong’o’s. She plays her role so fluidly and easily. Nalwanga portrays a convincing Phiona (I see a lot of potential there) and Oyelowo, who’s performance I’m always confident of, does not fail to deliver. 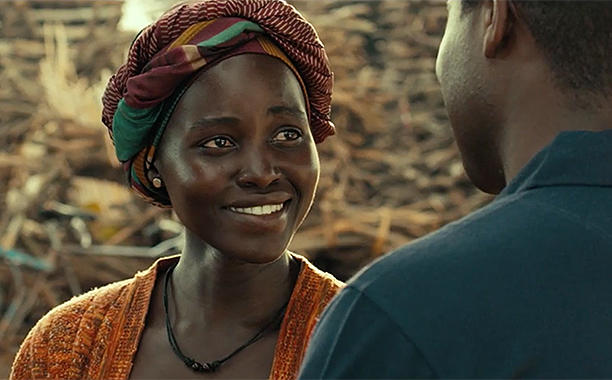 The movie has its own sound, and it’s one word-Africa. From Davido’s skelewu, to Number 1 Spice by Young Cardamom and BHB (I can’t stop singing it!), the film was replete with African music. It is only right that the audience should be made to get a feel of the environment through the music.

I want to commend Mobolaji Dawodu, costume designer for Queen of Katwe for an outstanding job. The costumes were appropriate and suited to the characters- not over-the-top, and portraying the colourful dress culture of Africans.

Queen of Katwe is filled with so much lessons and messages. In modern-speak, it is a very “deep” movie. Even though, agreed, the plot was predictable from the start( It couldn’t be helped, it’s a biographical after all), the director did a laudable job of inserting plot twists and heightening suspense at different turns throughout the movie. Dialogue in the movie is either witty and humorous, or dripping with quiet wisdom. Issues addressed in the movie include: Poverty, class segregation, Illiteracy, and Gender Discrimination.

Queen of Katwe is a brilliant movie, and I think more people ought to see it. Kudos to the filmmakers.