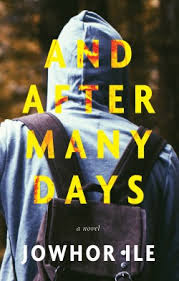 Jowhor Ile's And After Many Days was recently announced as the winner of the Etisalat Prize for Literature, 2016. Frankly, if I hadn’t won this book in a giveaway much earlier, I probably wouldn’t have bought or read it till now. But that would have been my loss, because behind the simple, unassuming, yet beautiful cover lies a poignant theme-the effects of crude oil extraction on the minority tribes of the Niger Delta. Still one would still have to dig through the drudgery of the mundane and ordinary everyday life to get to this. Tip- the author does not arrive at the point until the middle of the story.

Set in Nigeria in the late ‘80s to the mid-2000s, And After Many Days covers themes of childhood, religion, family, loss, corruption, politics and injustice. The Utus are a modern, middle-class family based in Port Harcourt with strong ties to their hometown in the Niger Delta. Paul, the first son is dutiful, responsible and well-behaved. Ajie, the second son and third child, who is the narrator of this story is a belligerent, angry and rebellious, yet sensitive and brilliant child. The second child and only daughter, is the fiery and passionate Bibi. They are raised by strict, yet loving parents- Bendic, and Ma. These children live altogether normal, ordinary lives- boarding school, holiday trips to the village, short stays with friends and family, but tragedy strikes when Paul goes missing.

A subplot is the clash between the Ogibah Youth Forum and the elders of Ogibah on how to deal with Company, a crude oil extracting organisation that often pays off indigenes to surrender their lands for oil mining , and tries to make up for oil spillages by offering some of their children scholarships. The youth, having received bribes from Company, want the Ogibah people to let them build gas pipelines on their lands, damning the consequences. The elders, most of whom had been born before Company came, had welcomed them into their midsts and had seen the impact that oil pipelines caused, are not willing to make the same mistake again. The differences in opinion lead to violent clashes, in which the police force plays a great part.

The Police Force is portrayed as very corrupt; police officers being employed by individuals as hit men, cases being covered up to save face, brutality against the innocent- the force is a mess. Also for a moment, we see the destructive and powerful impact of a military dictatorship on a society, the cost of standing up for the truth in  an authoritarian regime as nine Ogoniland activists are executed unjustly.

These major themes, I believe, make Ile’s story too important to ignore. Oil spillage, corruption and police brutality- all these things are still very much a thorn our nation’s side. In the end, the common man suffers the consequences, regardless of whether he took part in committing the acts or not. One part of the book I will never forget is Bendic’s reply to Mr Ifenwa on the corruption of the nation’s leaders.

“I mean….the problem is obviously systemic, and resolving it will require more than the actions of one good man or removing people from positions. Its about developing processes, checks and balances, and organising ourselves in a good way”